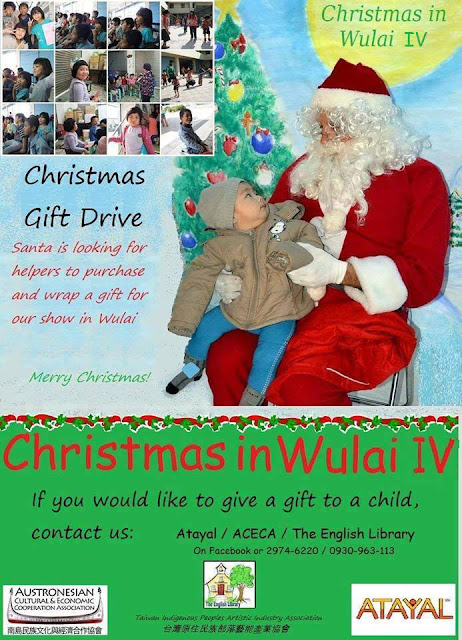 For the fourth consecutive year, members of the ATAYAL Organization (愛泰雅協會) are organizing a Christmas event with local Taiwanese organizations to benefit the indigenous children from the Atayal tribe in the Wulai District (烏來區) of New Taipei City, Taiwan. The festive event, titled "Christmas in Wulai IV," brings the Western-style holiday spirit to the beautiful, mountainous indigenous communities of Wulai District, not far from Taipei City. Volunteers will perform live music in front of the Wulai Atayal Museum (烏來泰雅民族博物館), in the heart of the busy tourist sector of Wulai. Visitors can enjoy Christmas songs, take a photo with Santa Claus, and go into the museum for an education on the culture and history of the Atayal tribe. Aside from performing in public, Santa Claus and his volunteers will spread smiles among the children in the local communities by providing them gifts at Wulai District's local churches.

"We are proud to work with local businesses, organizations and volunteers every year to spread Christmas spirit, which is the spirit of giving. For many people, Taiwan has given us so much, so this is our way to give back to Taiwan," states Gary Smoke, the event's main organizer and the Director of International Relations for the ATAYAL Organization. "We believe in supporting the indigenous communities, because we cherish Taiwan's indigenous cultures, and hope to share the importance of cultural preservation and pride."

Everyone who can make it to Wulai on December 21 are invited to enjoy the festivities and explore all of the wonders that the area has to offer. The area attractions include the Wulai Atayal Museum, which is providing the venue for the activity. It is the best place to learn about the Atayal tribal history and culture from the area. People who cannot attend are also welcome to contact the organization to make donations of toys and school supplies for indigenous children.

Each year, this activity attracts generous volunteers and organizations in Taiwan who want to give back to local communities. This year, a student group from the Taipei European School (TES) will participate in the activity. The event will include a partnership with Ming Dao Fashions and Fabric King Textile Co, LTD. Ming Dao Fashions is a collaboration between Ming Dao University (明道大學) in Changhua County and Sussman International Co. They will be supplying comfortable and stylish pants to over 150 children in Wulai as warm Christmas gifts.

Mark Sussman, founder of Sussman International Co. explains, "The years of dedicated work of the ATAYAL Organization supporting the indigenous tribes of Taiwan has inspired Ming Dao Fashions and Fabric King to help support them."

The founder of the ATAYAL Organization, Tony Coolidge, was hired in August 2015 as an advisor in Taiwan for the Maori Star Compass Project in Hawkes Bay, New Zealand. This is a project organized by the Te Matau a Māui Voyaging Trust, a cultural foundation directed by Chairman Piripi Smith. The project is supported by the Hawkes Bay Regional Council. He was hired by Piripi Smith to find a suitable Austronesian design from Taiwan to symbolize the ancient Maori ancestors that came from the island that is now known as Taiwan. The design is to be used on a main pou (carved wooden totem) that serves as the West marker in the Star Compass. Special care was taken in the search for indigenous designs that were from the appropriate time period and region that would have been related to the people who migrated from Taiwan to colonize the Pacific region over 2,000 years ago.

The Maori tribe, like other Austronesian island peoples, sailed across thousands of kilometers of sea to find their Pacific colonies. They sailed in primitive sailing ships called "waka," and used no technology or maps. But instead, they used the stars, the winds and the sea. The ancient skill of sailing with the winds and the stars has been passed down for thousands of years, and has been revived in modern times by Austronesian tribes. Currently, groups of Austronesian navigators day continue to amaze people by sailing to faraway destinations across the Pacific.

The Star Compass will be used primarily as an education resource for a wide range of groups; trainee navigators of waka hourua, waka crew, school, youth and community groups. With appropriate signage visitors and tourists to the region will be able to understand the basics of how celestial navigation works.

Chairman Piripi Smith approached Mr. Coolidge to get his advice on choosing a design to represent Taiwan. Coolidge did not like the choices that were presented, and advised that Mr. Smith consult with the Taiwan National Museum of Prehistory to find artifacts from the time period of approximately two thousand years ago, the time period when Austronesian ancestors left Taiwan to settle the Pacific. Subsequently, Mr. Smith hired Tony Coolidge to travel to Taitung, Taiwan to handle the task.


"This was an amazing honor for me to assist Mr. Smith with this project," said Coolidge, "Knowing that the design we choose will help Austronesians in New Zealand learn about and recognize their connection to their ancient homeland in Taiwan for generations to come."

Mr. Coolidge gave a lecture to museum staff about Taiwan's Austronesian connection with New Zealand, and worked with the museum's director, Shan-nan Chang, to select the appropriate pieces. Tony also located a stone from a beach near Dulan in Taitung County to be set under the pou in New Zealand, to represent a spiritual connection with the Taiwan homeland. Once the photos of artifacts were shared online, a selection was made, and the building process for the pou had begun. Both Mr. Coolidge and Mr. Chang hope to travel to attend the opening ceremony of the Star Compass in New Zealand.

Posted by Indigenous Bridges at 7:42 PM No comments: