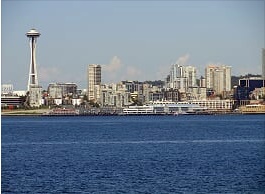 Every summer I go to Seattle to visit my father and family. Last year, I also had another very special reason for visiting the Seattle area.  Each year since the mid-80s, the Native Americans from the Pacific Northwest have been celebrating "The Journey.”  This annual event is a reenactment of the way the Native Americans and many other indigenous groups traveled from place to place throughout history.  The month-long event is also an opportunity to bring the tribes of the Pacific Northwest and their guests from afar together to share stories, songs, dances and their culture.  It is not only building unity amongst the tribes, but "The Journey" brings together the tribal families and their supporters who accompany them on this month-long trek.  The paddlers share the hardships of their ancestors and follow "protocols" when they arrive at new destinations.  This year's event was sponsored by the Nisqually Tribe and was known as "The Paddle to Nisqually.” There were two groups that joined this year's journey, the southern group, which started from the Washington Coast near Quinault and the Northern Group, which started from Vancouver Island in Canada. 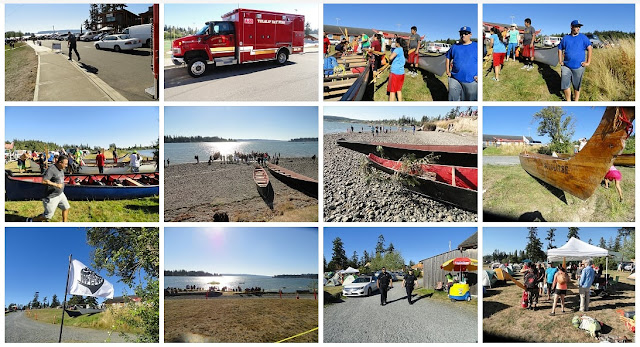 I caught up to "The Journey" on July 24, 2016 as it reached the shores of Tulalip Bay on the Tulalip Reservation.  I made several friends and witnessed my first canoe landing on a sunny Sunday afternoon.  My heart soared as I watched.  It was a beautiful day, and all of the participants were enjoying the festivities.  The canoes were magnificent and there was a lot of variety in their construction.  I was particularly impressed with the protocol they followed as they arrived. As the canoes came in, they were greeted by a member of the tribe they were visiting.  One of the paddlers would then stand up and tell who they represented, who their ancestors were, how long and tiring their journey was and then asked to come ashore for rest and nourishment.  All the while, the paddlers in the canoes held their paddles parallel to their bodies facing the sky.  Many of the paddles were adorned with carvings, which were very impressive.  Once the canoe master completes his request to come ashore, the tribal representative commences to explain who their tribe is, who their ancestors were, how they understand the plight of the visitor's journey and welcome's their guest ashore for nourishment and a needed night's rest.  The paddlers would then go to an area, back their canoes to shore (as a sign of non-aggression) and disembark. This process was repeated at every stop and became quite a chore when there were over eighty canoes. 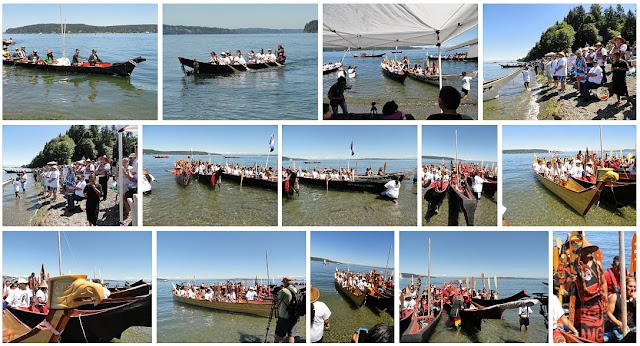 My next stop was the shores of Alki Point in Seattle on the 27th of July.  The Muckleshoot Tribe hosted this stop and arranged buses to the camp grounds on the reservation for the weary travelers.  It couldn't have been a better day, and the number of canoes had grown to over 80, as the northern and southern routes met on the western shores of Puget Sound near Suquamish, WA the previous day.  I was amazed to see the construction of some of the canoes.  There were even some that resembled the canoes from the Amis Tribe in Taiwan.  Early the next morning the canoes set out for Owen Beach in Ruston near Tacoma, WA.  Owen Beach is in Point Defiance Park.  Point Defiance Park is an amazing place.  The park has a zoo, an aquarium, an old fort called Ft. Nisqually, a science and math institute and a famous rose garden.  Another well needed rest, dinner and evening of celebration was waiting for them when they arrived.   These celebrations would most often last late into the evening and songs, dance and drums were witnessed by the attendees.  It was a very moving experience and an honor to observe.   I also had the opportunity to meet members from the different "Canoe Families."  I was told that this year's event had representatives from as far away as New Zealand.  Yes, there was an Austronesian presence at this year's event.  This has happened in the past as I was told.  Last year, a group from the Philippines joined one of the families.  It is my hope and my dream that next year we can send a canoe from Taiwan to join in.  I have requested to be allowed to join one of the canoe families and the response has been positive. My last connection to this year's journey was at the Nisqually Tribal Ceremony.   There, the Native Americans celebrate with a week-long festival of dance, drums and songs.  It is also a time to build relationships between tribes, and that is where I was looking to make some in-roads.  I was there to meet Hanford McCloud, who just happened to be the organizer from the Nisqually Tribe.  We chatted in his motorhome for some time, and I had the opportunity to let him know our intentions of forming "Sister" type relationships for cultural, educational and economic exchanges.  The fishing industry was the first thing we discussed as I had heard they do a lot of diving for geoduck.  I was told that he is part of a tribal consortium of tribal partners that focus on the fishing industry.  We agreed to pursue this relationship.  Next, we talked about next year's journey and the possibility of participation from Taiwan's indigenous tribes.  I suggested we could bring a canoe with crew and a group of artisans, wood carvers, that could make a totem pole, start a canoe or display their skills in some way.  It would also be wonderful to be able to bring some singers and dancers, but the cost is always something we must consider.  From our discussion, I think we have found a partner in this endeavor and hope to join the Nisqually Canoe Family.  I wish I could have stayed longer, but I needed to continue my own journey to Portland, Oregon.
In Portland, I had an appointment to visit with Professor Jeff Thao.  Professor Thao is from Laos and works at Portland State University.   He visited Taiwan earlier this year and our organization introduced him to several of our local contacts.  He also gave a presentation showing the results of observations he made while here.  We had lunch and he introduced me to two of his colleagues.  We discussed possible relationships and support groups that we could connect with in the future.

My journey had to move on.  My next stop, Las Vegas, Nevada!  Yes, Las Vegas!  My father and I visit my brother's house in North Las Vegas every summer.  It is usually very hot, but he has a pool.  While in Las Vegas, I was honored to have a visit from Tse Chi Chad Yen, a Taiwanese-American, who has been living in New Mexico.  He and his friend Dwight Largie, an American Navajo, drove all the way from New Mexico up to Las Vegas to meet with me.  We had a very nice meeting at my brother's place along with some excellent BBQ.  The next day they came back for a follow-up meeting and I was honored with a ceremony of “smoke."  The ceremony was sounding a little scary to me, as I don't smoke cigarettes and if I get to close to people who are smoking, I start to gag and want to, well you know.  I sheepishly admitted to them this fact and told them I would do my best and join in.  He then got out a pouch and proceeded to roll up some of his medicine.  We then went out in the back yard, and he started the ceremony.  It was important to be standing on terra firma while performing this ceremony.  Dwight Largie lit up his medicine and started the ceremony.  He blew smoke in many different places and directions and also used it to cleanse himself.  After that he handed it to me and I hesitated for a second and then took a puff.  To my surprise, it didn't taste of tobacco at all.  I then proceeded to follow the same ritual as Dwight did (with his help and direction).  After that, Chad followed me.  It was really a moving experience.  Dwight then took out a necklace made of bison bone.  The beautiful pendant was carved like a feather and the necklace had a leather strap.  He proceeded to blow some smoke on the pendant and raised it in the different directions while chanting quietly.  Upon completing this, he said the necklace was for me and he placed it around my neck.  I was so moved I almost fainted.  In my eight years of working with indigenous people, this was the first time I experienced anything like this.  I really started feeling a connection.  He then gave me a hug and Chad did as well.  It was like we were becoming brothers from a new mother, mother earth.  We then went inside, where Chad showed me his medicine box.  It was filled with honors bestowed upon him and gifts much like the one I had received.  He had a small piece of buffalo hide with the long buffalo hair still attached, as well as other various items.  One "special one" was wrapped in a silk piece of cloth.  It was his most honored gift, and he told a wonderful story of how he came to possess it.  We concluded our meeting shortly thereafter, and they jumped back into their car and drove back to New Mexico.  I was amazed that they had driven all that way to see me only to return the next day.  Chad has since joined the ATAYAL team and will be pursuing our interests in America and with the Navajo Nation.  This was certainly one of many highlights of my journey.

My last stop was back up in Washington State and a meeting with Robert Satiacum from the Puyallup Tribe.  Robert is a strong advocate of indigenous rights and the perfect guy to put the plight of the American Natives into perspective.  We talked about "water" and how we all share in this element.  In fact, we are all made up of mostly water.  Water has no color, no barriers and no preconceived agenda.  It flows like life, itself.  We should all embrace it and "free" it.  This sounded a bit like a metaphor and I was beginning to understand his attitude and outlook on life.  We chatted for hours in his back yard.  He told me how he was a representative at the DNC representing indigenous people of the Pacific Northwest.  (Democratic National Convention)  He also told me of his intent to go to North Dakota to join in solidarity with the people protesting a pipeline that could pollute their drinking water, in the event of an oil spill.  We have since had several chats online with a worldwide network.   Robert is a very interesting man, dedicated and active when it comes to Native affairs.  We quickly became friends and have talked extensively about different ways to cooperate.  I look forward to seeing Robert and all of the new friends I have met during "my journey" back to America.

"My Journey" last year was an excellent one.  Our organization made many new contacts and have laid out the groundwork for future cooperation.  The ATAYAL Organization is committed to building bridges and this one has reached all the way back to America.  More to come!
Posted by SmokenFire at 2:28 AM